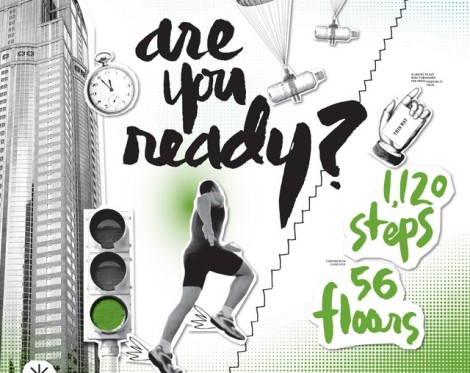 Looking Up: The CF Foundation Stairclimb

“This is either going to be a great idea or the worst thing ever.” And so began the call from our friend, Jeff Barlow. He had been designing materials for the CF Foundation’s Stairclimb event for many years and it was time to pass the baton. He was well aware of the disease’s history in my family (see Help Q&A in the climb to fight CF!) and wasn’t sure what my response would be. I immediately accepted.

There is nothing happy about Cystic Fibrosis, but the Q&A team wanted to inspire a passion and energy to a very worthy cause. We decided to focus on the challenge of the climb. The entire Q&A team took on the challenge in 2010 and were well-versed in what it’s like to climb 56 floors. There’s a bit of arrogance after the first few flights and when the first water stand appears, you think you’re invincible and just breeze past it with a smile. This choice is immediately regretted two flights later. Suddenly your feet feel like they are stuck in cement. Surely you’ve already climbed a hundred flights. Breathing hurts. It’s conceivable that you’ve entered the stratosphere—until you see that you’re on the 16th floor. You dream of crews bringing emergency water supplies. Somewhere near floor 48, you think that you could actually make it and see yourself winning a big golden medal.

At the end, while trying to catch your breath, there is a moment where you think “What if breathing was this difficult all of the time?” and you hope that your small part helps to make a difference.

Poster Design Description: Hand-inked copy was coupled with a collage-style design, showing things the climber may encounter on their journey through the 1,120 steps: toy paratroopers delivering water, a break though the clouds beyond the stratosphere where astronauts float, and a shiny winner’s medal at the top.

Help Q&A in the climb to fight CF!

Join Q&A in the fight against cystic fibrosis! We concepted and designed the marketing materials for the December 1, 2011 CF Foundation Stairclimb, and are looking for team members to climb with us.

This cause is very near and dear. My sister Avis lost her battle with cystic fibrosis in 2001. She was diagnosed at age 3 and was given 4 years to live. Always the adventurer, she nearly made it to 32.

Cystic fibrosis is an inherited chronic disease that affects the lungs and digestive system. According to the CF Foundation website, about 30,000 children and adults in the United States (70,000 worldwide) have the disease. A defective gene and its protein product cause the body to produce a thick, sticky mucus that clogs the lungs, creates life-threatening lung infections, breaking down the lung walls, and also blocks the body from absorbing nutrients.

One major stumbling block—the disease is not “big” enough for many pharmaceutical companies to develop drugs. With support from the CF Foundation, there have been huge strides in drug research. Just this week, the Wall Street Journal reported on a very promising drug that if approved, will be the first on the market to target the defective protein that causes CF. “At Last, Cystic Fibrosis Drugs Seem Near”, October 20, 2011.

There have been amazing advancements towards a cure since 1972 when my sister was diagnosed. In her short but jam-packed life, she traveled, studied journalism (working for the Orlando Sentinel and the Orlando ABC affiliate, WFTV), married and had two healthy boys. Those boys are now teenagers—yikes! By supporting the CF Foundation, I’m hopeful that I’ll see the day that this disease is eradicated.