The International Day of Happiness

Since 2013, the UN has celebrated the International Day of Happiness.

This day recognizes the importance of happiness in the lives of people around the world. In 2015 the United Nations launched 17 Sustainable Development Goals that seek to end poverty, reduce inequality, and protect our planet—three key aspects that lead to well-being and happiness.

A happiness Q&A with Q&A

The gang sat down with the happiest person we know, John Wells of JB Welly to talk about happiness. Missing in action, Brianna and new mom Jinna (who is experiencing her own sleep-deprived happiness).

John:  “Do you consider yourselves happy people?”

Todd:  Boy! Yeah John! We’re so happy all the time!

Todd:  I don’t know how to define happiness. I generally think I am, but then I realize sometimes that I am horrifically cynical. But maybe that makes me happy. I don’t know.

John:  What are your happiness triggers?

Dalila:  That’s true. I would add a sunny day.

Todd:  I think any for me it’s interactions with nature in particular. It’s not a forefront, forebrain feeling, in that case it’s just kind of a subliminal state.

John:  Of a general well being?

Todd:  Yes. But specifically, the things that really make me happy are episodes of old “Star Trek” which make me so absurdly happy, even though I’ve seen them all a million times.

John:  Maybe that’s why, because you have seen them a million times.

Todd:  Well I know, but I find something new in them every single time I watch them. You know it USED to be things that made me really, really happy were forms of physical expression that I used to do (before I got old and decrepit). Exercise like boxing and martial arts, that were physically dominating and competing with another person. DOMINATION, JOHN! With my strength and power! (sigh) But “Star Trek” is all I have left.

Wendy:  I would say very yummy food makes me happy.

Dalila:  That’s a good one.

Todd:  Why do I want to hang out with a bunch of old people like me?

John:  So next question is “Do you track your happiness levels on a daily basis?”

Wendy:  As a matter of fact, this morning I mentioned that I have a new thing I’m incorporating into my life called Hate 30. I take 30 minutes each day, to deal with all of the things I hate.

Dalila:  And then she becomes happy.

Todd:  I think there’s intangibles to happy. We naturally track our unhappiness. So that tends to stand out to us, because human memory is fixed on events that are traumatic. That’s the things you remember the most. It’s harder to remember really happy memories. It really is.

Dalila:  You go home at the end of the day and say “today some car almost ran me over!” You think about that but the rest of the day was really good. In a way that’s how we measure our happiness.

John:  Do you belong to any happy organizations?

Wendy:  What are happy organizations?

Alfredo:  Is that a cult?

John:  Does that make you happy?

Todd:  I can’t say it makes me happy, it’s just something I see as moral necessity. I think we’re programmed in our culture to feel guilty about being happy, about doing something good for ourselves. You know what I mean? Oh God, I’m being so selfish. I’m doing this just because it makes me happy. So. I don’t know. Sometimes I feel good about things. Is that a form of happiness?

Todd:  We have this definition of happiness almost like a Theme Park. You know what I mean like: ‘Yay happy!’ But happy, I think is, as you get older in particular, sometimes is just a very fleeting and internal thing. I don’t know.

Wendy:  It’s not as exuberant as what it was.

Alfredo:  As what you think it is.

John:  Who in your opinion has the best laugh in the world?

Wendy:  Brian Reed.* It’s so distinctive. You can find him anywhere in a crowd when he’s laughing.

John:  The next question is really important. Is “Monty Python’s” Ministry of Silly Walks, the funniest comedy skit ever made?

Todd: I won’t say it’s the funniest but it’s up there. It’s absolutely up there. It will still make me laugh.

Wendy: I like the Spam bit better than the silly walks.

John:  Ok, then. What DO you think is the world’s best comedy skit?

Todd:  I think the funniest thing ever, that no matter how many times I watch it makes me laugh, is in “Young Frankenstein.” When they’re going up the stairs and Frau Blucher (played by Cloris Leachman) asks Gene Wilder if he wants something to drink.

Wendy: I was also going to say, back to the earlier happy trigger question, is the show “Baskets.”

Todd: Which almost no one else in this world laughs at but Wendy.

Alfredo:  Louie Anderson, who plays Zach Galifianakis’, mother is always at Costco. Any jokes about Costco I find hilarious. Because that’s my childhood.

Todd: She goes to Costco to be happy.

Alfredo:  I go to Costco to be happy.

Todd: Is “funny” synonymous with “happy,” though? It’s interesting that’s where we all go.

Dalila: That question for me is really more about just all of those references I experienced growing up in Mexico. That the Mexican shows are super melodramatic and over-exaggerated, like someone gets bonked on the head basically. BONK! Getting bonked. It’s just so stupid!

Alfredo: It’s over the top.

Dalila:  Yeah. Completely over the top. Why are we laughing at this stupid thing?

Todd:  Then you would love The Three Stooges. When Curly shoots — with a gun — into bowl of clam chowder to kill an errant clam. That’s a happy trigger for me

John:  The next question is “are you kidding me?”

Alfredo:  No we’re actually quite serious. That’s the reality.

Wendy:  John is the King of Puns. He’s a punny person.

John:  Do you think it’s possible to increase your happiness?

John:  Where do people go to get more happy?

Alfredo:  Well there’s a lot of establishments. It goes back to your happy triggers, right? If you like puppies and kittens, there are services where you can take care of puppies in your house for a couple hours.

Wendy:  Or you can go to the cat cafe.

Dalila:  Hire one of those people who just cuddle with you.

Wendy:  I think Hawaii is a good place.

Todd:  At Joe Bar you can find happiness.

Alfredo:  Two for one specials.

Dalila:  I think if you’re with anyone positive you get happier. I’ve been negative at times and if I’m around my sister, no matter how much I want to keep feeling bad I can’t, because she’s super positive. Positive people make you see the brighter side. 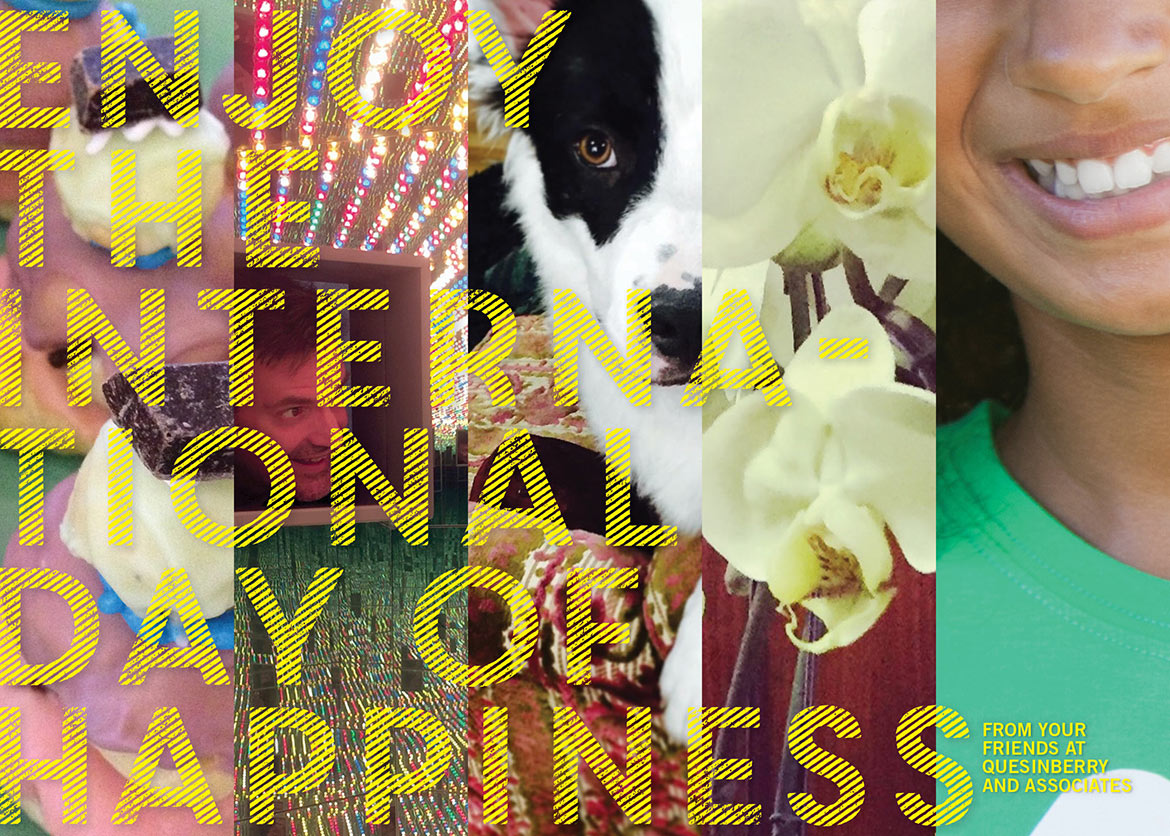 *Brian Reed, Principal of Bri Hospitality, has been a client with Q&A since the 90s. We’ve had lots of time to enjoy his laughter.